The Mavericks are back in the playoffs for the first time since 2016, when JJ Barea was a player of the week recipient, Dwight Powell was still receiving DNP-CD’s occasionally, and David Lee was playing as a backup big man. Times have changed since Dallas’ last playoff appearance, including the face of the franchise. The Mavs are facing a daunting challenge in their first playoffs as a young core against the LA Clippers, headlined by star-power at the top of the roster, and depth at the bottom of the roster. Here are some of the key swing factors in the series:

The Mavs posted the league’s best offensive rating this year at 116, but in the 3 games against the Clippers against the Clippers, the Mavs posted a 106 offensive rating, which is equivalent to the 27th ranked offensive rating from this year’s regular season. The Mavs struggled against two of the premier wing defenders in the NBA in Kawhi Leonard and Paul George, and they still struggled to find a rhythm offensively even without both of them on the floor. The Mavs need to be patient in finding their shot, while also being aggressive in taking shots early in the offense that are deemed reasonably open. The Mavs had an issue of forcing the 3 ball too often this season, and if they continue to force that issue, the series could be over in a blur.

The Mavs have had notable concerns all season long with ball-watching and missing rotations. It goes without saying that mistakes against arguably the most talented team in the league have to be minimized to the extreme in order to come out of this series on top. The Mavs force the least amount of turnovers in the NBA, and they also had the least efficient defense of the 22 teams in the seeding games in Orlando. Below is the Clippers’ shot chart from 3 games against Dallas in the regular season, and it’s quite apparent how effective the Clippers are inside the 3 point line. 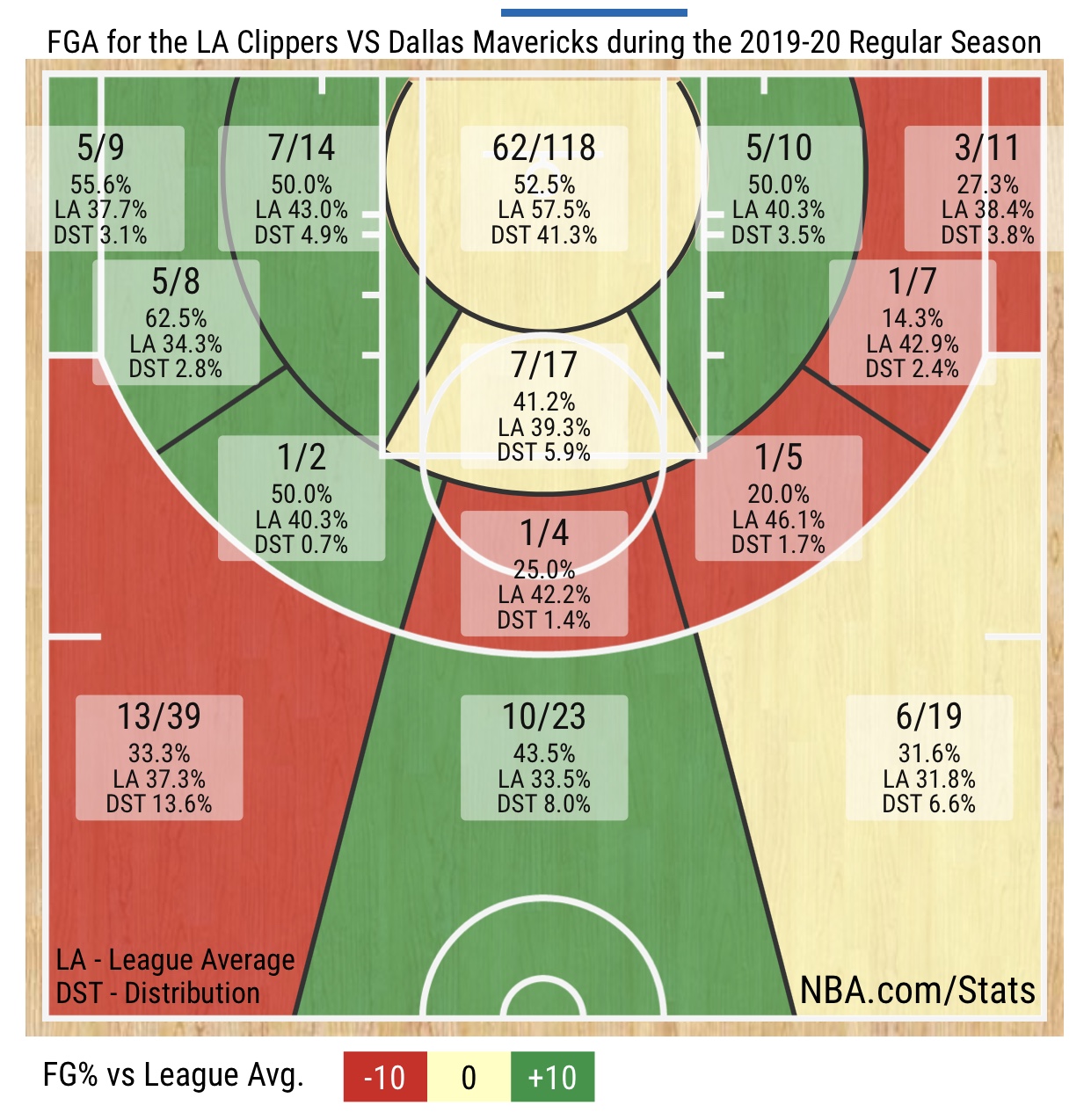 This bodes poorly for Dallas, given that their defensive shot chart shows how much Dallas struggles defending within 10 feet of the rim. In the seeding game between these two teams, you might remember Ivica Zubac going 10/10 from the field with almost all of his shots coming at the rim.
The Mavs will also need to defend the top of the key well, since that is a clash of one of Dallas’ strongest areas on the court defensively, and one of the Clippers’ biggest strengths against Dallas. Furthermore, it’s especially important to stop the top of the key because that is where so many of the Clippers’ plays begin, especially from Kawhi Leonard.

Doncic and Porzingis can’t do everything

Dallas was the lone team to have two players make the all-bubble teams, but the reason Porzingis and Doncic did so well may have been partially because of the extra load they had to take on with many of the role players struggling. From game one, the Mavs’ role players were slow to help Doncic and Porzingis, including Seth Curry, Maxi Kleber, and Tim Hardaway Jr. Dorian Finney-Smith found his rhythm late into the seeding games, as did the other 3, but Curry, Kleber, and Hardaway Jr still struggled to find consistency from game-to-game. The Mavs are at their best when their role players have balanced scoring across the board, which gives Dallas a slim margin for error in the playoffs.

In all, the Mavs face quite an uphill battle against one of the league’s title favorites and overall strongest, deepest, and well-coached teams. In order to make this series last long, the Mavs will need creative coaching, support for the stars, and strong defensive awareness. Stopping Kawhi Leonard or Paul George is nearly an impossible task that every NBA team has tried doing, but hasn’t successfully pulled off, so the Mavs need to go down the roster and find other areas they can limit. The battle of two of the best coaches in the league between Rick Carlisle and Doc Rivers should be an entertaining series.